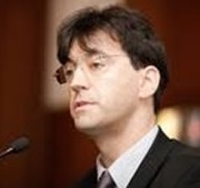 Physics boffinry centre extraordinaire CERN would love to be processing its reams of research data in the cloud, if only Europe would hurry up with a regulatory framework. Bob Jones, head of openlab at CERN, said that not having standards and a legal framework in place that applies across Europe is holding up its move to the cloud.

CERN has 20 members, all European countries, and its data sits in 130 data centres across the world. The Large Hadron Collider and its attached experiments generate information in mind-boggling quantities, which all has to be processed so boffins can make their findings public. The four major experiments at LHC – Atlas, LHCb, ALICE (A Large Ion Collider Experiment) and Compact Muon Solenoid – generate 1 petabyte of raw data per second...

CERN has to move with the times and see what cloud can do to handle its big data. The research body is currently in its first year of a two-year pilot phase testing European cloud computing platform Helix Nebula - aka "The Science Cloud". CERN, the European Space Agency and the European Molecular Biology Lab are working together to use Helix Nebula as a cloudy testing ground. “At the moment, we’re looking more at infrastructure as a service,” Jones said, “starting at the bottom and working our way up.” At the moment, all of CERN’s data centres are publically funded, so it wants to see if it can start using commercial data centres for additional capacity. The pilot phase will run until the end of 2014 and it will be trying to assess a whole host of issues that moving science into the cloud could cause.

“If that works, we want people to tender at the end of the pilot phase.”

Helix Nebula is a new, pioneering partnership between leading IT providers and four of Europe’s biggest research centres, CERN, EMBL, ESA and PIC, charting a course towards sustainable cloud services for the research communities - the Science Cloud.

CERN is the world’s largest particle physics lab and home of the Large Hadron Collider (LHC), the world’s most powerful...
End-User

CloudEO AG, created in 2012 and based in Munich (Germany), brings data, software and processing po
Supplier

The National Research Council (CNR) is the main public research entity in Italy aimed at carrying out, promoting,...
End-User

DESY is one of the world’s leading accelerator centres. Researchers use the large-scale facilities at DESY to explore...
End-User

The European Molecular Biology Laboratory (EMBL) is one of the world’s top research institutions dedicated to basic...
End-User

The European Space Agency (ESA) is Europe’s gateway to space. Its mission is to shape the development of Europe’s space...
End-User

ESO, the European Southern Observatory, is the foremost intergovernmental astronomy organisation in Europe and the...
End-User

The European Synchrotron Radiation Facility (ESRF) is one of the most powerful synchrotron radiation source in Europe.
End-User

Exoscale is an established and recognized Swiss player in the Infrastructure as a Service field since 2011.
Supplier

​GÉANT is the pan-European research and education network that interconnects Europe’s National Research and Education...
Supplier

iNNOVO is able to provide newest processor technology through the HPC OpenStack platform to the science network.
Supplier

The Karlsruhe Institute of Technology (KIT) is The Research University in the Helmholtz Association.
End-User

Prologue Group is a software editor and service provider in the fields of cloud computing, demater
Supplier

Q-Leap Networks is all about Linux clustering. Their Cluster OS Qlustar is a full-fledged platform to implement, manage...
Supplier

The Science and Technology Facilities Council is a UK government body that carries out civil research in science and...
End-User

Stichting EGI was established as a Dutch Foundation ‐ an independent legal entity – in February 2010 and is located at...
Supplier

As a non-profit organisation, SWITCH guarantees Switzerland’s access to the Internet. One hundred employees work on a...
Supplier

The Server Labs is a European IT company, specialising in IT architectures, software engineering and is a leading...
Supplier

Ultimum Technologies s.r.o. is a European provider of OpenStack-powered Infrastructure as a Service for public clouds,...
Supplier

The Helix Nebula logo is a registered trademark of CERN – The European Organization for Nuclear Research.